Skip to content
It’s sold over 19 million copies worldwide.   Been translated into 46 different languages.  Grossed over 300 million in DVD and book sales, according to a 2009 article by Forbes. What is ‘The Secret’?  It’s a carefully marketed and presented pseudo-science, that teaches people they are in total control of their lives. Due to a so-called ‘law’ of attraction, everything that happens to us is a manifestation of our thoughts. We’re gods, really–we are! This means that if the Queen of England and I both willed it, she could will the monarchy into continuity, and I could will it into extinction: Both would happen!

Seriously, anyone who says that 6 million Jews attracted their deaths, should not have an ounce of credibility. Yet, Rhonda Byrne is wildly successful. Are you still reeling from the fact that she blames victims for their own deaths? Her exact words to account for tragedies are:

Often [people] recall events in history where masses of lives were lost, and they find it incomprehensible that so many people could have attracted themselves to the event. By the law of attraction, they had to be on the same frequency as the event. It doesn’t necessarily mean they thought of that exact event, but the frequency of their thoughts matched the frequency of the event. If people believe they can be in the wrong place at the wrong time, and they have no control over outside circumstances, those thoughts of fear, separation, and powerlessness, if persistent, can attract them to being in the wrong place at the wrong time.

Seriously woman: Are you telling me that the Jews who were killed under Hitler, were exterminated because they feared the Third Reich too much? That their survival rested upon them believing they were invincible? Horseshit! My outrage takes my language to the stables.

So who exactly is Rhonda Byrne? 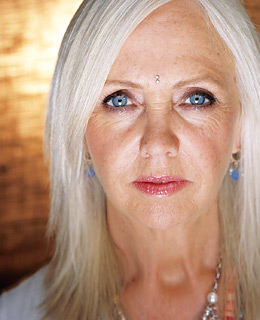 There have been many articles written about her. This one from The Australian Magazine gives a comprehensive look at her business practices. Note to the reader: She doesn’t seem exactly trustworthy. Here is what former collaborator Esther Hicks had to say about her, in a New York Times interview:

To say that this former TV producer from Melbourne has successfully screwed many people over, is an understatement. However, Byrne is undeniably savvy. She could have called this film “The Law of Attraction”, but strategically tapped into our curiosity and proclivity for mystery: We are programmed to uncover “The Secret”. This extract from The New Yorker magazine sums up her ‘law’ of attraction packaging pretty concisely:

The Secret” was released around the same time as the film version of “The Da Vinci Code,” and it was cleverly packaged as a historical mystery. There are lingering shots of faded cursive script on parchment paper, often accompanied by pounding drums or wordless choirs, and Byrne talks about “tracing the Secret back through history,” revealing all the great thinkers who have harnessed its power. (According to one title card, “The Secret was suppressed,” though we never learn how, or by whom)

Utter bullshit! (In the stables again) I recently re-watched the film, and wondered how people could buy into such unfounded garbage. Not to mention selfish stupidity! I’ll leave the latter for another blog-post.

I would like to highlight the fact that Byrne has cleverly avoided the media since 2007. After her appearance on The Oprah Winfrey Show and an interview with the New York Times, she went into seclusion and has avoided critical questioning. This means that the litigation to which she has been subject, is not widely covered in the press. The more asinine of her pronouncements have not been defended. Apart from this article in the New York Times, briefly mentioning her legal victory over a former associate, there is no other information easily available (on the web at least,) with the results of other litigation involving her. Byrne continues to build her empire writing books for an audience whose faith is unwavering. She appears on mediums such as private blogs, which are uncritical and supportive of her message.

Who is her audience?

Until the publication of the 2007 New York Times interview, “The Secret” DVD had sold 1.5 million copies at $34.95, with no paid advertising or theatrical release. More than half of the copies had been sold in the month preceding. This was attributable to Byrne’s appearance on The Oprah Winfrey Show in January of that year. What was formerly popular in exclusively New Age circles, crossed over to the mainstream.

The American self-improvement industry is valued at close to $11 billion. John LaRosa, President of Marketdata Enterprises, released this report in November 2013. 70% of self-improvement consumers are affluent women, living on the East and West coasts of the United States. There are very few barriers to entry in the industry, permitting the activities of numerous entrepreneurs and small firms. The industry is guru driven. Hence, it was very easy for Byrne to appeal to a mass of people, whose concerns included wanting more money, better homes, fancier cars and more functional relationships. There was a market craving her message.

The truth and the fiction

Byrne’s prescriptions are not too different from those of Shakti Gawain, author of “Creative Visualization.” In chapter 3 of her book, Gawain offers us an affirmation: “Everything I need is coming to me easily and effortlessly.” Deepak Chopra in his book “The Seven Spiritual Laws of Success”, posits that the 4th law is the “Law of Least Effort.” Merde! (This is the French word for shit. Now I’m mucking about in French stables!) I think of my deceased grandfather who had to cycle 2 hours one-way to work each day, to build roads for the British colonisers. His day began at 4 am, when he tended to his crops and animals before heading to work. When he came back from work, there was more work to be done. See how many times I used the word work? Nothing came easily or effortlessly. He was not so fortunate in the lottery of life, as to be awarded the birth of a privileged American consumer of the self-improvement industry. Even if he wanted to be rich, famous and materially successful, he couldn’t have manifested it. His life circumstances did not allow for it.

The non-fulfillment of dreams is a hard pill for many to swallow. This young girl, however, gets it: Sushma Verma was 13 years old when her father sold his land to pay for some of her Master’s in Microbiology tuition. Her family lives in a single-room apartment in Lucknow, North India. Her father’s daily wage is less than USD $3.50. She had this to say about life:

There are a lot of dreams…All of them cannot be fulfilled.

This thinking is not just relegated to her, an impoverished child from the third-world. Rock legend Sting has attributed his success to hard work, persistence and an element of luck. He has cautioned his own children against believing in their invincibility. Billy Joel as well sings in”Vienna”:

Dream on but don’t imagine they’ll all come true.

If people who are part of the wealthy 1% can acknowledge their own limitations, why can’t we?

The desire for control & entirely of possibility

Over the course of human evolution, as each group of people became gradually aware of the enormity of its isolation in the cosmos and of the precariousness of its hold on survival, it developed myths and beliefs to transform the random, crushing forces of the universe into manageable, or at least understandable, patterns. One of the major functions of every culture has been to shield its members from chaos, to reassure them of their importance and ultimate success.

This is what “The Secret” provides for some people: A feeling of control and positiveness that their dreams will be manifested. In an American society where rags to riches is possible, and great wealth and fame attainable, it becomes easy to believe that you can achieve it. You will achieve it. However, how many actually make it? How many actually succeed? Csikszentmihalyi quotes J.H. Holmes on page 9:

The universe is not hostile, nor yet is it friendly. It is simply indifferent.

Some might hesitate to believe this. They may feel as though they’ve been blessed, and have enjoyed the workings of beneficence in their lives. I am not disputing their experiences. I just can’t comprehend why some people should receive blessings and other people should receive blows; for apparently no good reason. “Some guys have all the luck,” sings Rod Stewart. I have come to believe that our life here on this planet is entirely of possibility.

I believe in the power of intentions and the vibrations from energy. I regard visualization as a very useful tool for goal setting and creating positive feelings. It also develops our imagination. It should not be construed, however, as the key to controlling our universes. We cannot will everything that we want to happen. Nobody has that power. Where we are on this planet is a combination of choice and circumstances. We’re better off accepting that we co-create our lives with the knowledge that we apply to our circumstances.

“The Secret” achieves “dumbination” more than life domination. The ‘law’ of attraction is not based on hypotheses which have been rigorously and scientifically tested. It is conjectured to appeal to a segment of the population which is already receptive to its message. It offers a feel-good beacon of hope to those who don’t care for scholarship. Rather than seeking domination, we should simply seek truth.